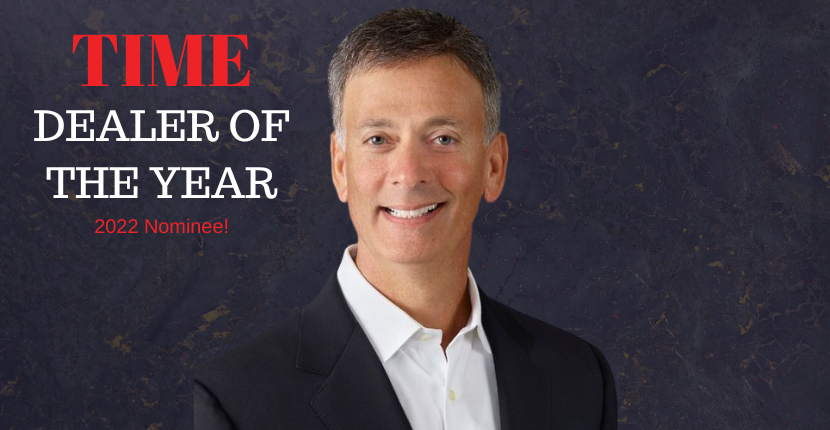 Recently, TIME announced that Ray Scarpelli, dealer principal at Ray Chevrolet and Ray Chrysler Dodge Jeep Ram in Fox Lake, Illinois, was nominated for the 2023 TIME Dealer of the Year award. One of the most prestigious and highly coveted honors, the TIME Dealer of the Year recognizes the top auto dealers in the country. Scarpelli was chosen for the award for many reasons—one being the success of his two dealers, including Ray Chevrolet!

What the Award Means

Scarpelli will be one of a select group of 48 dealer nominees from across the country who will be honored at the 106th annual National Automobile Dealers Association (NADA) Show in Dallas, Texas, on January 27, 2023. The TIME Dealer of the Year award recognizes the nation’s most successful auto dealers who also demonstrate a long-standing commitment to community service. In Dallas, Scarpelli will be representing the Chicago Automobile Trade Association (CATA) in the national competition. His nomination is one of only 48 auto dealers nominated for the 54th annual award from more than 16,000 nationwide.

Scarpelli Reacts to the Nomination

Ray Scarpelli reacted to the honor of the nomination, saying, “The lessons I have learned in the retail auto business and the people I have been lucky enough to know and work with have all contributed to the foundation of who I am today.”

How Nominations are Made

Dealers worthy of the TIME award are nominated by the executives of state and metro dealer associations around the country. For example, Scarpelli was nominated for the TIME Dealer of the Year award by the CATA Board of Directors.

Winners will be chosen by a panel of faculty members from the Tauber Institute for Global Operations at the University of Michigan. One finalist from each of the four NADA regions and one national Dealer of the Year will be selected.

The three selected finalists will receive $5,000 for their favorite charities and the winner will receive $10,000 to give to charity, all donated by Ally. Additionally, Ally will take it up a step in its 12th year as exclusive sponsor. Ally will honor dealer nominees and their community efforts by contributing $1,000 to each nominee’s 501(c)3 charity of choice. Nominees will be recognized on AllyDealerHeroes.com, which highlights the philanthropic contributions and achievements of Ally TIME Dealer of the Year nominees.

Scarpelli owns Ray Chevrolet, a family-owned and operated Chevrolet dealer that has been serving residents in Lake and McHenry County for over 40 years. Located on US-12, it is a short driving distance away from each town we serve including McHenry, Chicago, Milwaukee, WI and Elkhorn, WI. As your local Fox Lake car dealer, we pride ourselves on offering the highest level of service and the best experience any customer could ask for at a Chevy dealership in Fox Lake, IL. Visit us to learn more about why Scarpelli and Ray Chevrolet are nominated as TIME Dealer of the Year nominees!