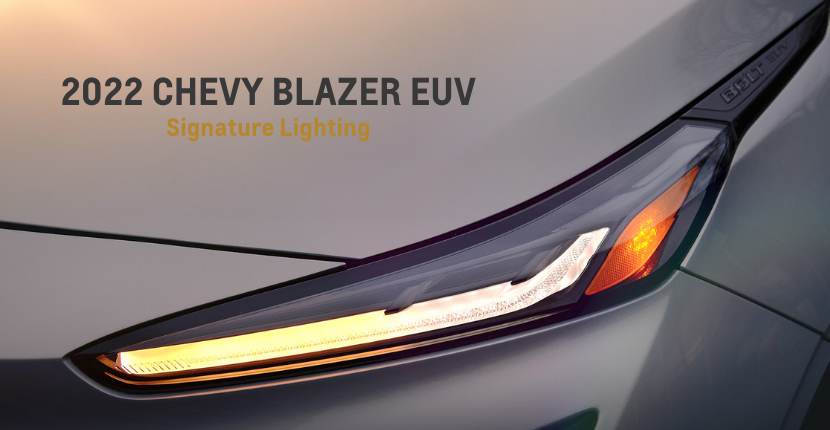 In a new teaser video published on TikTok, Chevrolet recently released a sneak peek of the new 2020 Chevy Bolt EUV. Showing off its signature lighting, the video highlights the upcoming electric crossover’s LED lights. Chevrolet has also announced that the larger 2022 Chevy Bolt EUV will be the first vehicle to be equipped with General Motors’ Super Cruise self-driving technology.

New Models in the Lineup

For the 2022 lineup, there will be two Chevrolet Bolts available. Both of them will be electric. While the Bolt EV will be an update of the existing hatchback, the Bolt EUV is a brand-new electric crossover. The EUV will receive signature badging to differentiate it from the EV.

While Chevrolet won’t be releasing the 2022 lineup until later in the year, it’s clear that the Chevrolet Bolt EUV will be a bigger crossover with new, innovative technology and features. One of the Bolt’s most exciting new features is the vehicle’s signature lighting, which features a sequential front turn signal and LED daytime running light. The lighting sets the Bolt EUV apart from both the Bolt EV and other electric crossovers. It’s just the first in a series of unique features coming to the Bolt EUV in 2022.

Going into production in summer 2021, the Bolt EUV will also be the first electric vehicle in the Chevrolet lineup to feature Super Cruise. This technology is the auto industry’s first true hands-free driver assistance system, and it’s even compatible with certain highways.

Chevrolet has already released exciting details about the 2022 Bolt’s Power Flow Screen. This industry-leading feature gives vehicle owner’s critical information about their electric vehicle, such as regen braking use and battery charge use.

A trickle of additional details about the vehicle’s interior has also been coming out over the past few months. It is expected that the interior of the upcoming Bolt will be far darker than the current Bolt EV, and it will feature a more transitional layout and use of buttons.

The layout of the Infotainment System will be more minimalistic in design than the current model in terms of controls below the screen. In general, the controls and dashboard will no longer have the white and dark-gray color screen. Instead, a darker color palette will awash the new interior.

The newly redesigned exterior of the Bolt EUV will be based on General Motors’ BEV2 electrical vehicle  platform, but it will have its own unique look. The videos Chevrolet has released so far indicate the Bolt will be taller, sleeker, and include different head and tail lights.

Chevy Dealer Near Me

Ray Chevrolet is the top Fox Lake Chevy dealer. We have a wide selection of new and used Chevy vehicles for all of your driving needs. We have an expert staff eager to assist you with finding the perfect new vehicle for you or receiving maintenance on your existing vehicle. Stop the search for a “Chevrolet dealer near me” and visit us today to learn more about the exciting new Chevrolet 2022 lineup or schedule a test drive!